Here is a history of The Association of Irish Musical Societies. Click on the icon to visit their website. 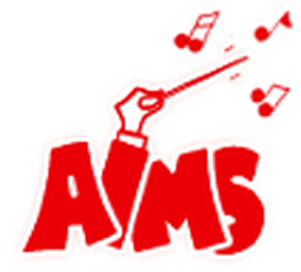 The Association of Irish Musical Societies (AIMS) provides a voice to musical theatre in Ireland. Over 130 musical societies throughout the whole of Ireland are members of AIMS and this relates to around 14,000 people directly involved with musical theatre and an audience base of around 1.2 million. AIMS provides many services to its members, ranging from help and advice in choosing shows, resolving any difficulties that they may face, running various workshops on all aspects of theatre, through to an adjudication and awards scheme that is constantly pushing forward the standards of musical theatre. Membership of AIMS is open to any society that is involved in Musical Theatre in Ireland, subject to their membership application being approved by the AIMS ruling body - the National Council.

AIMS is divided into 6 regions with each society belonging to a single region. 9 Arch Musical Society belongs to the Western region of AIMS. A regional committee is elected each year to run the region at a local level. Many regions run workshops, concerts or activities for the benefit of the whole region. Each region is then represented at a national level on the AIMS National Council. All National Councillors and Regional Representatives have two major things in common, they all give their time and effort to AIMS on a voluntary basis and they all share a great love for Musical Theatre.

One of the most popular services provided by AIMS is the adjudication and awards scheme. All member societies wishing to participate are placed in one of two sections for the scheme - Gilbert or Sullivan. A society's section allocation is dependent on it's history in the adjudication and awards scheme. Each season, two highly qualified musical theatre experts travel the country viewing shows by AIMS member societies. The adjudicator then produces their report on each show, highlighting both the strengths and weaknesses of the show, and this is then returned to the particular society in an effort to raise the standards of musical theatre in Ireland. A public version of these reports is also printed in the AIMS monthly magazine, Showtimes.

The climax of the adjudication and awards scheme is the annual awards banquet which takes place during the annual AIMS national seminar. Both adjudicators choose three nominees in each award category, with a winner for both the Gilbert and Sullivan sections being announced at the awards banquet.


top of page
Powered by