9 Arch Musical Society Received 2 Nominations
For The AIMS Awards!
We were beyond thrilled to have received two nominations for the AIMS award.  The wonderful Alan Greaney was nominated for Best Male Singer as Tevye in Fiddler On The Roof and Kevin Murphy was nominated for Best Supporting Actor as Motel also in Fiddler On The Roof.
We may not have won any actual hardware, but Alan and Kevin were true winners for 9 Arch and we are beyond proud of them!  Well done!! 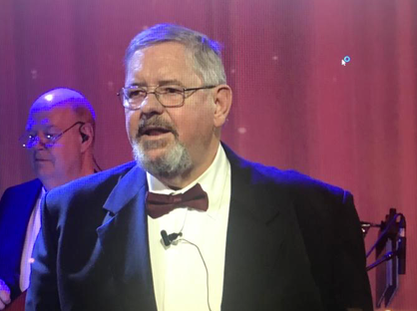 We Are Still Going To Perform Oklahoma...
We Just Have To Wait Another Year!

As you know, it has not been possible for many societies to perform their shows due to the COVID-19 pandemic.
some societies were so very close and had put such very hard work into their performances, props, stages and costumes etc.
​At 9 Arch we decided to postpone our performance of Oklahoma until 2021, and are very much looking forward to getting started as soon as we can.  We will keep you updated here and on our Facebook Page with any news.
​
​Please 'like' our Facebook page to be kept up to date.

If you would like to register your interest for the auditions, please email Anne: 9archmusical@gmail.com

In the meantime, get to know the brilliant show and take a look at our audition tips.
​Good luck and see you there! 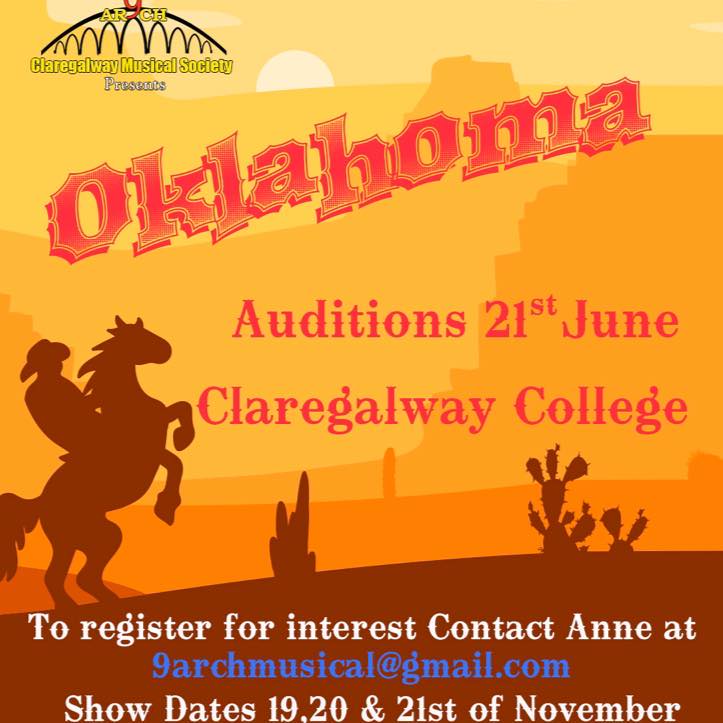 And our tickets have gone on sale!!
We are so thrilled to have our tickets for Fiddler on sale at The Town Hall Theatre.
​Be sure to get your tickets soon, as they started selling immediately!

Following the most amazing audition day,
​we are so thrilled to announce our cast for Fiddler will be: 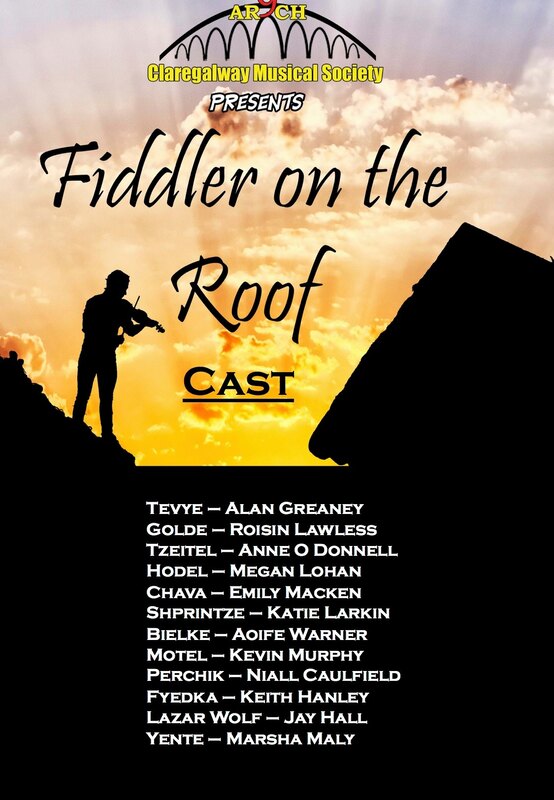 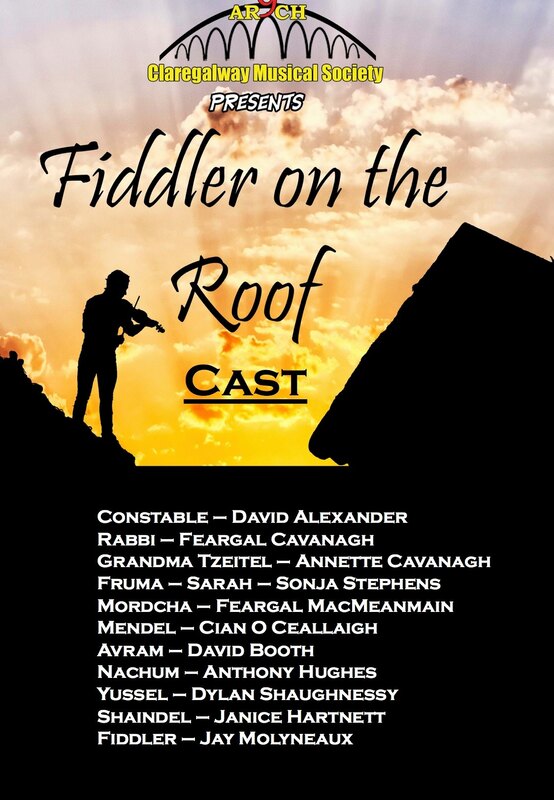 Fiddler On The Roof!
​
​This will play at The Town Hall Theatre in November.
Please 'Like' our Facebook page and keep checking our website to keep up to date with audition and other show announcements!
London Show Weekend

We are planning a Society weekend in London - Friday 8th-Sunday 10th March
We will take in as many shows as possible over the weekend and plan on having a fantastic musical time!

Everyone is very welcome.  If you are interested, please email the society for further details.
​Hair & Make Up Lessons
The AIMS Western Region are providing a Hair & Make Up Workshop with Aaron Ward.
​There will be three different themes demonstrated with tea and coffee thrown in!

This will take place at 2pm on the 17th February at Claregalway College.
Spaces are limited and cost 25.00 per person

Please book in advance by emailing the society for a booking form.

A Fantastic opportunity to learn how the professionals do it!
The A.I.M.S Society critique of The Sound of Music is now available on our website.  Please see 'previous productions' and 'A.I.M.S Critique.
A fantastic review - well done everyone!!

The Sound of Music Cast! 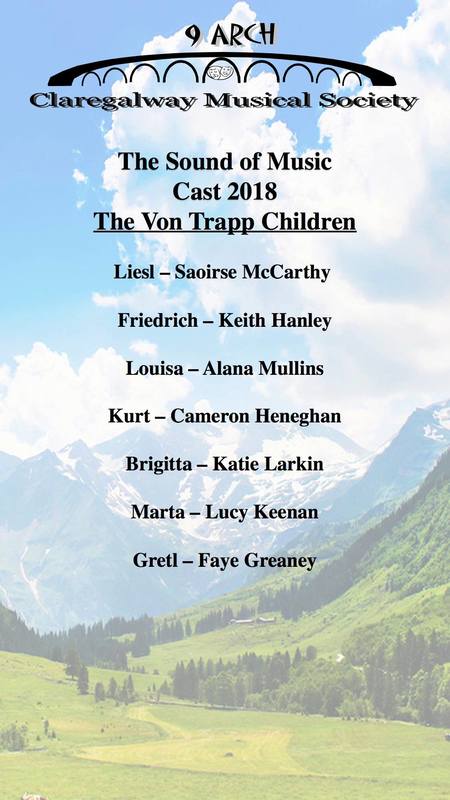 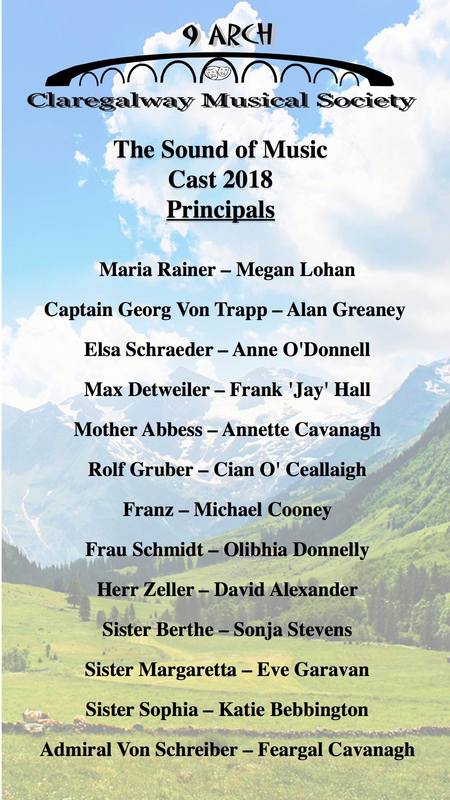 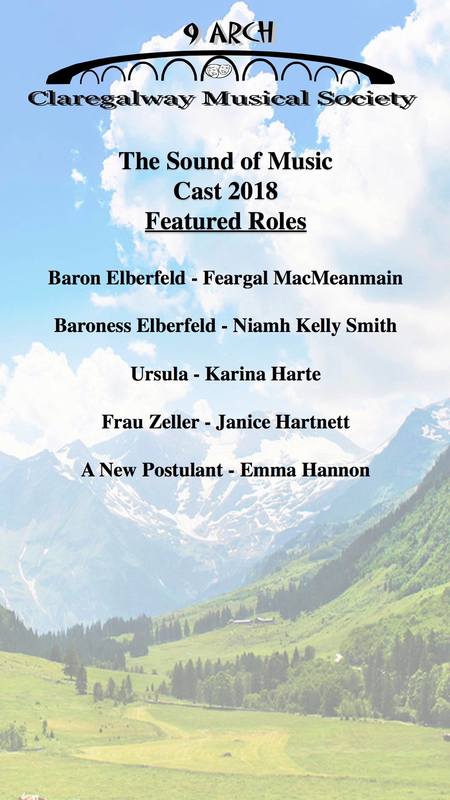 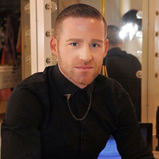 The brilliant Jay Molyneux will be the Director and Choreographer for our performance of 'The Sound of Music'.  Jay worked with us on 'Joseph and The Amazing Technicolour Dreamcoat' so we know that we are in talented hands.  We can't wait to start working with Jay on this fantastic show.
​ 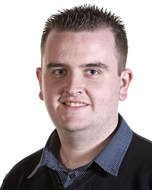 We are thrilled to announce that Shane Farrell will be our Musical Director for 'The Sound of Music'.  Shane has worked with us on numerous performances and is an incredibly talented Musical Director.  We look forward to working with Shane on what will be a brilliant show.

Our 2018 Committee has been elected as follows:

We thank them in advance for all of their commitment and hard work!! 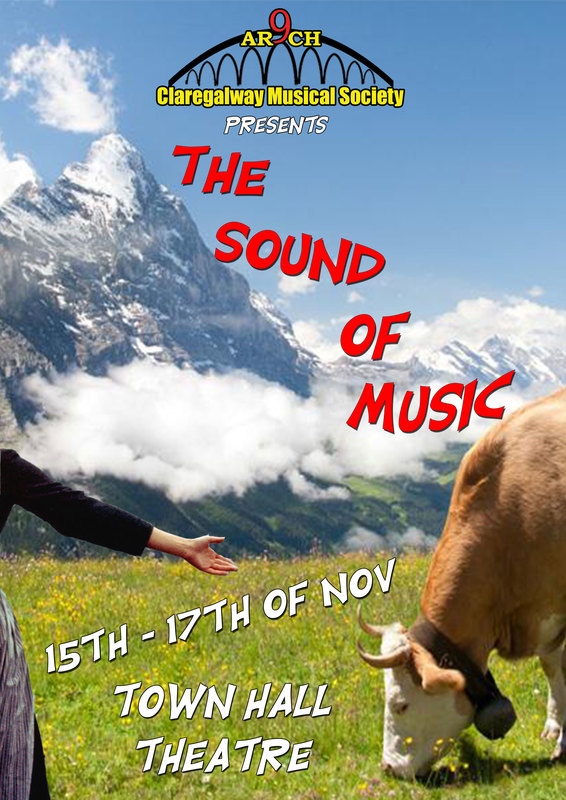 We are thrilled to be able to announce our 2018 show will be The Sound of Music!

We will be performing at the Town Hall Theatre 15-17 November.  Auditions will be announced shortly but are planned between May-June.  Further announcements to follow regarding the committee and production team.

Watch this space for further announcements!

The 9 Arch Musical Society will be holding their Annual General Meeting on Wednesday, 7th February at 8pm at  Claregalway College.  Current, future, past and anyone who just has an interest in the society are very welcome to attend.
We look forward to seeing you there.

Our very own Feargal Cavanagh was interviewed by Keith Finnegan on Galway Bay FM regarding Joseph and The Amazing Technicoloured Dreamcoat.
Have a listen at 1 hour 39 minutes!
http://galwaybayfm.ie/podcast-keith-finnegan-show-friday-november-17th-2017/

The cast of Joseph in the Connacht Tribune!  10th November 2017 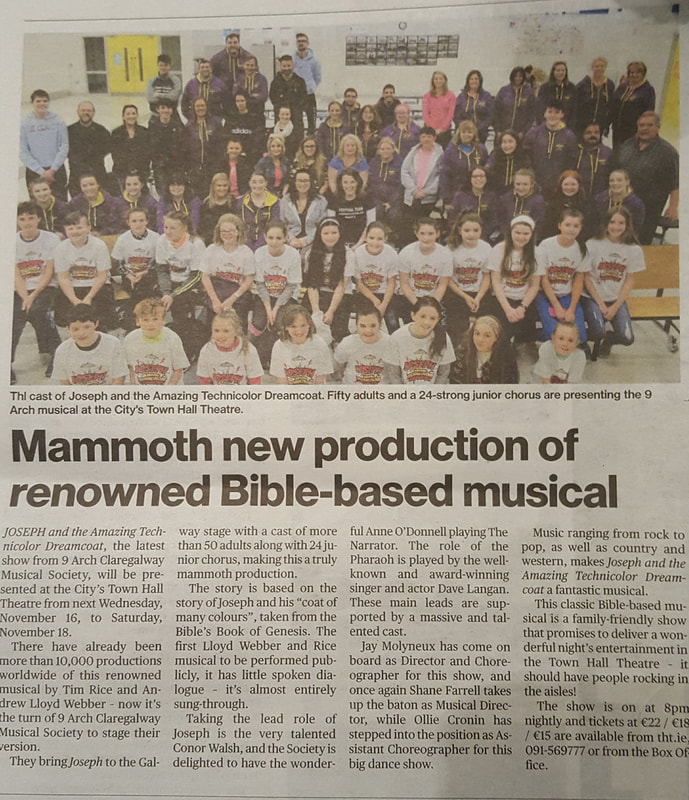 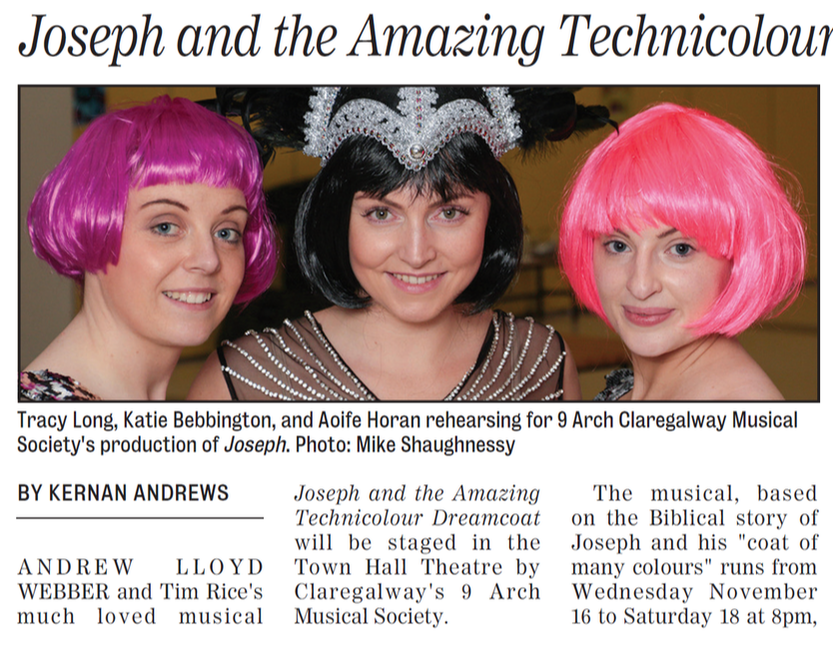 Joseph and The Amazing Technicolour Dreamcoat - In The News

As the cast prepare for the opening night of 'Joseph and The Amazing Technicolour Dreamcoat', interest has been building in the media.  Here are just some of the articles that are appearing in this weeks 'The Tuam Herald' 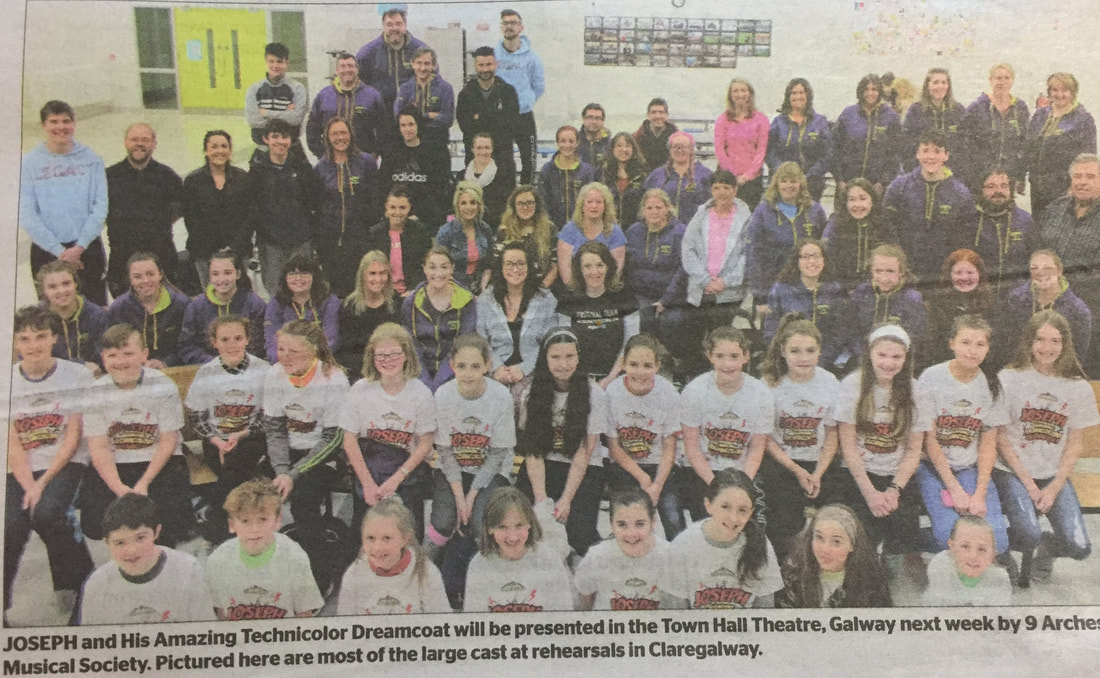 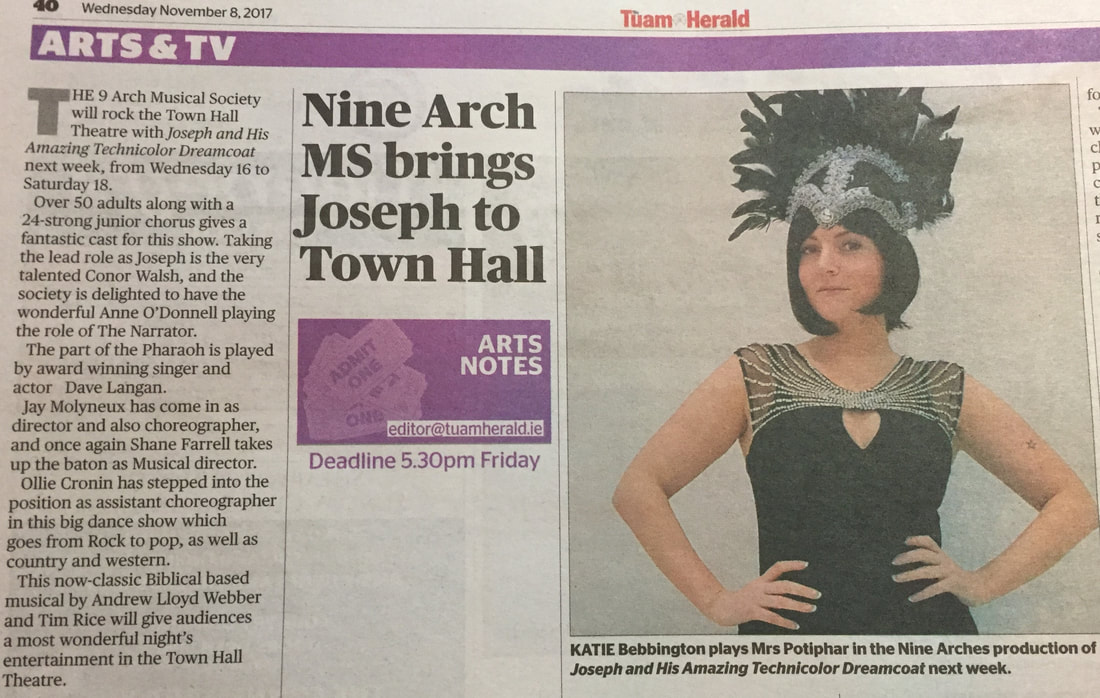 Show for November Announced: Joseph and The Amazing Technicolour Dreamcoat

We are delighted to announce that our upcoming show will be Andrew Lloyd Webber’s ‘Joeph And The Amazing Technicolour Dream Coat’, showing at the Town Hall Theatre 16-18 November.
​
If you would like to audition or get involved with the production please contact us with your details by leaving us a message here, emailing us at 9archmusical@gmail.com or call or text to 0863378335.

We look forward to hearing from you.

At the prestigious AIMS National Awards held in In the I.N.EC. in Killarney over the weekend of the 12th, 13th and 14th of June. Amanda Stuart won the Best Comedienne award, in her role of the Wicked Witch for 9 Arch Claregalway Musical Society production of The Wizard of OZ.

At a packed, spectacular awards ceremony, where just about 1,200 musical society people, gathered from all over Ireland to hold the annual National awards. The group from Claregalway were absolutely thrilled and delighted when it was announced that Amanda had won the award for Best Comedienne 2015. Amanda was unable to attend as she is currently involved with a play in Las Vegas, but Chairperson Hannah McCreanor accepted the award on her behalf.

Hannah said we are all both excited and delighted to be here, and to accept this first National award for both Amanda and the 9 Arch Claregalway Musical Society. It’s a fantastic milestone for everyone in the musical society here in Claregalway.